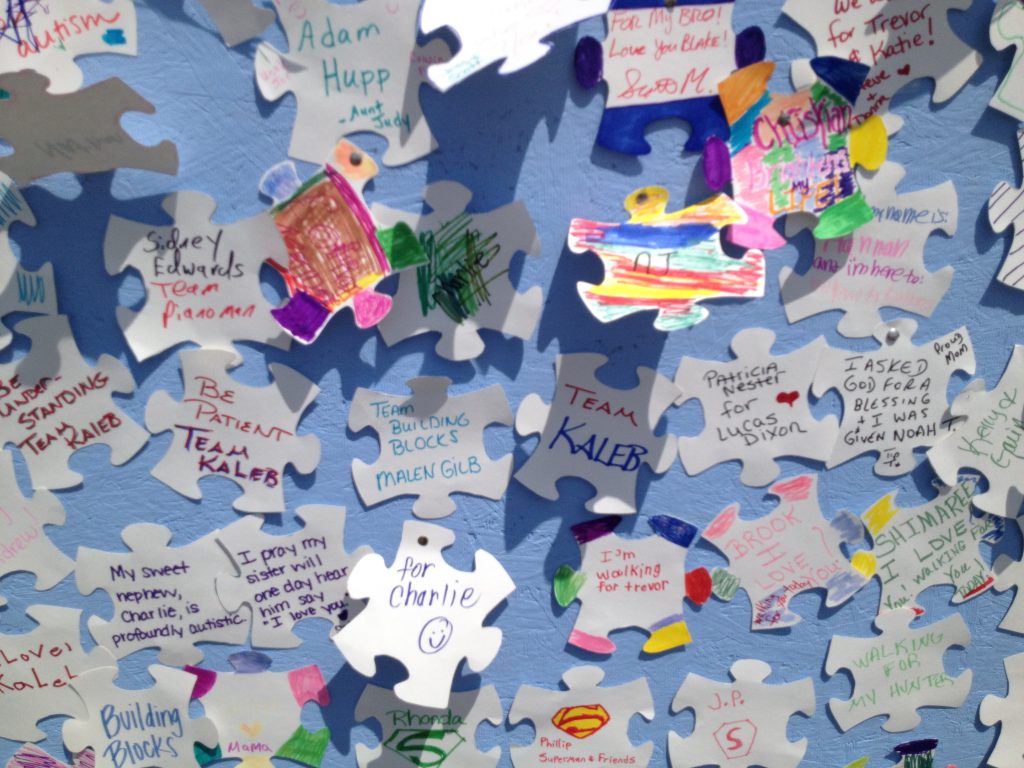 Puzzle pieces are the symbol of autism because they reflect the mystery and complexity of the autism spectrum. Participants were invited to decorate puzzle pieces to explain their reasons for participating in the event.

DANVILLE, VA – On Saturday, April 21, over 500 residents of Danville, Pittsylvania County and surrounding cities and counties gathered at the Riverwalk in Danville to participate in the first annual Dan River Autism Awareness 5k.

Due to requests from participants, the donation deadline was extended through May 31, 2012. Participants raised approximately $22,000, far exceeding the event fundraising goal of $15,000. A portion of the funds was donated to Autism Speaks, a national autism advocacy and research organization. The majority of the funds was used to establish the Autism Education Fund through the Community Foundation of the Dan River Region.

“The Dan River Autism Awareness 5k was a first-time, one-day event, but with the endowment of the Autism Education Fund, its impact on our community will be permanent,” said Lauren Mathena, a member of the event planning team.

Mathena said, “We will continue to build the fund by holding the 5k each year, and we hope that our community will access the fund immediately. To get started, we are hosting a reception on June 13th to share more information about the Autism Education Fund with team captains, volunteers, and representatives from related non-profits.”

Fundraising was only the secondary goal for the Dan River Autism Awareness 5k. The primary goal of the event was to raise awareness about autism in the Dan River Region. After finishing the 5k or 1-mile course, participants joined the post-event autism celebration. Building Blocks Center for Autism and The Hughes Center for Exceptional Children provided educational information about autism. Yard signs containing facts about autism were located between the sign in area and the 5k course. Participants were encouraged to decorate a puzzle piece to share personal reasons for participating in the event.

Courtney Adams is a member of the planning team and the program director of Building Blocks Center for Autism. Adams said, “We are thrilled with the fundraising amount, but we are most excited about the opportunity to build the sense of community among local individuals, families, educators and others impacted by autism.”

Building Blocks Center for Autism was a key sponsor of the event. The Hughes Center for Exceptional Children, Danville Regional Medical Center, Center for Pediatric Therapies, and around 15 other local organizations joined them.

Heather Showalter is a member of the planning team and the Autism program director The Hughes Center. Showalter said, “The Hughes Center is extremely proud to have been a part of such an amazing community event. Autism awareness is so very important as it helps to ensure vital research funding efforts and increased treatment availability for individuals living with Autism. Everyone at The Hughes Center is looking forward to being a part of next year’s event.”

“Planning is already underway for the second annual Dan River Autism Awareness 5k, which will be held in April 2013. We hope to increase participation and fundraising, and make next year’s event an even more empowering experience for our local autism community,” said Mathena.

About Autism
Autism is a complex neurobiological disorder that inhibits a person’s ability to communicate and develop social relationships, and is often accompanied by behavioral challenges. Autism Spectrum Disorders are diagnosed in one in 88 children in the United States. The Centers for Disease Control and Prevention have called autism a national public health crisis whose cause and cure remain unknown. (Source: http://www.autismspeaks.org)

“We are so excited to help open the doors of the future to so many students,” said Debra L. Dodson, Executive Director for The Community Foundation. “We have awarded 591 scholarships totaling more than $1,500,000 since the Foundation began in 1996.”

The Bennett-Bushnell-Jones-Kaufman Scholarship was established from four individual scholarships to benefit outstanding nursing students at Danville Regional Medical Center School of Health Professions.  These scholarships were transferred to The Community Foundation in 2008 by the Piedmont Health Foundation.  Recipients will be announced May 18th.

The James W. Bryant, Sr. and James T. Collie Scholarship was established with The Community Foundation of the Dan River Region in 2005 by a retired school teacher. The scholarship is for Pittsylvania County Public Schools graduates, with a preference for those pursuing education or nursing.  Three scholarships of $1,200 each were awarded to high school seniors Tyler Capps (Dan River High School), Brittnie Cooke (Gretna High School) and Shacolby Fergurson (Chatham High School).

The Bernard C. Calvert Scholarship was established in 2004 by the Brosville Council #51 of the Junior Order of United American Mechanics. The scholarship is restricted to Tunstall High School graduates, preferably students who attended either Brosville or Stony Mill Schools.  Sarah Terrell (Virginia Tech) is receiving $1,450.

The John Watson Daniel Scholarship was established by the JWD Retirement Club in 1997.  A scholarship in the amount of $600 was presented to Hunter Adkins (Dan River High School).

One student received the John R. and Betty B. Eggleston Scholarship, established in memory of Dr. and Mrs. Eggleston in 2002. The scholarship was presented to Kaitlin Robertson (Bartlett Yancey High School) in the amount of $700.

The Margaret Spruce Floyd Scholarship was established in memory of Mrs. Floyd and transferred to The Community Foundation in 2003. The scholarship is awarded to female high school students from Pittsylvania County.  Brianna Hess (Chatham High School) received $1,600.

The John B. Grubb Scholarship was established in 2007 in memory of Mr. Grubb to benefit Danville and Pittsylvania County Public School graduates.  Ling Guo (GWHS) received  $625.

The GW Class of 1957 Scholarship was established in 2007 with The Community Foundation.  The Class of 1957 created the scholarship for their 50th High School Reunion to benefit George Washington High School students.  Tipree Graves (GWHS) received $1,025.

The Arnold B. Porter & Elizabeth J. Porter Scholarship was established in 2006 for students who are members of Fairview United Methodist Church.  Two students, Audrey Savage (GWHS) and Amber Sulter (Lynchburg College), received $1,225 each.

Two area college students received scholarships for $1,400 each from the Irene L. Pritchett Scholarship, created years ago to benefit area black students. The Pritchett scholarship was transferred to The Community Foundation in 2001. Jazmine Willard (Longwood University) and Tyrabia Womble  (Dan River High School) were the recipients.

The Alger Pugh Memorial Scholarship was created in memory of Alger Pugh, GW High School football coach, after his death in 1984. The scholarship was then transferred to The Community Foundation and is given to deserving GW athletes. Two students were awarded scholarships of $1,400 each –  Matthew Riddle (GWHS) and Ali Stephens-Pickeral (GWHS).

The Eileen and Joseph Stendig Scholarship was created in 2005 to benefit area students.  Audrey Savage (GWHS) was awarded $1,850.

The Community Foundation of the Dan River Region, formerly known as DPC Community Foundation, is a public charity with total assets of $23 million. The Foundation serves a region from Martinsville-Henry County to South Boston/Halifax County, including the neighboring North Carolina counties.

The Community Foundation of the Dan River Region is a fully tax-exempt organization. Individuals or businesses may establish their own endowment or scholarship fund or may contribute any amount to existing funds. For more information, contact Debra L. Dodson at 541 Loyal Street, Danville, VA, 24541, (434) 793-0884 or visit their web site www.cfdrr.org.