The Community Foundation of the Dan River Region is now accepting proposals for its next round of grant making in Halifax County.

Approximately $1,300 is available for grants this year.  This total includes money from the Fund for Halifax County as well as the South Boston Medical Fund.

The Community Foundation is a public charity established in September 1996 by a steering committee of civic leaders to meet a variety of social, educational, cultural and other charitable needs in the Danville, Pittsylvania County and Caswell County area, as well as Halifax County and Northern North Carolina.

The Boys & Girls Clubs of the Danville Area recently announced the kick-off of its $2 million Community Endowment Fund Campaign, which the organization says is critical in establishing a long-term funding strategy for the Club and the 900 children it currently serves.

In 1998, Kenny Lewis Sr., Pat Daly, Sr., James Slade and other concerned community members, launched a campaign which began the start of the Boys and Girls Club in Danville, and the building of the much needed facility located at 123 Foster Street (Danville). To meet the needs of the children in Pittsylvania County, a second location was added in Chatham. Due to a generous donation made by Phil & Fran Daly, the Foster Street location was able to complete the Daly Teen Center.

“Over the past several years the Boys and Girls Club has experienced tremendous growth,” said Trina Pratt, Executive Director of the Club. “Now it’s time to aggressively plan for the future by establishing this endowment which will provide a stable foundation on which the Club can continue to give kids a safe place to learn and grow, as well as provide opportunities for them to realize their full potential as productive, responsible and caring citizens.”

In just a brief campaign time, the endowment has reached 10% of its goal, with $200,000 in donations and pledges already received by the Community Foundation of the Dan River Region (CFDRR). One hundred percent of donor gifts and pledges will be placed in the endowment with a percentage of the earnings from the endowment made available for operational use by the Club each year.

“We are very excited to partner with the Boys & Girls Club in securing funds for this endowment,” said Debra Dodson, Executive Director of the CFDRR.  “The Community Foundation was established in 1996 with a mission of improving and enriching the lives of those living in our community primarily through the generosity of donors.  What better way to support our mission and our community than enriching the lives of our youth.”

Nearly half a million dollars is needed annually (approximately $475,000 per year) to operate our two clubs,” said Steve Farrar, Treasurer of the Club. “With the help of generous donors and other supporters, our plan is to reach and exceed our $2 million campaign goal. Eventually we’d like to see this endowment support 25% of our Clubs operating expenses.”

The Boys and Girls Club strives to provide kids a safe, positive environment where they receive tools to fulfill their potential – and to have fun! Focus areas for the Club include academic success, character and leadership development, and healthy lifestyle behaviors.

“Our staff and board are committed to providing high-quality educational programs, building a sense of character and citizenship, maintaining diversity, and offering kids a safe, nurturing, and affordable environment,” said Mike Taylor, President of the Clubs Board of Directors.  “Kids in our community need the Boys and Girls Club and we’re glad we can be here for them.” 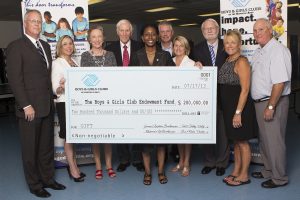 Note:  An Endowment is a permanent fund, kept separate from the Club’s operating fund, consisting of cash, securities, and/or property, which is invested in a diversified manner to produce income. A Club can only use a portion of the fund as directed by the policies and procedures governing the endowment fund and without invading the principal.

About The Boys & Girls Clubs of the Danville Area

Established in 1998, the Boys & Girls Clubs of the Danville Area serves over 900 children each year in the City of Danville and Pittsylvania County.  The Club has locations at 123 Foster Street in Danville and 115 South Main Street in Chatham, Virginia. Donations and pledges may be made at the Club, the Community Foundation and online here.  All checks should be made payable to the Community Foundation of the Dan River Region, c/o Boys & Girls Clubs Endowment Fund, 541 Loyal Street, Danville, VA 24541. For more information on the Boys and Girls Clubs, visit their www.bgcdanville.org or call 434.792.3449.

Make plans to attend the September 25 Estate and Charitable Gift Planning Institute at the RCATT center in Danville. The event will be hosted by The Community Foundation of the Dan River Region and co-sponsored by the Danville Bar Association and the Piedmont Chapter of the Virginia Society of CPAs.

In this national webinar broadcast, participants will learn from nationally-recognized speakers Ann Burns and Kathryn Miree as they share new strategies, practical solutions and opportunities for planning following the American Taxpayer Relief Act of 2012.

Advance registration through August 31 is $30; registrations after August 31 are $40. To register online, go to http://bit.ly/11cjm6u  or mail your check made payable to The Community Foundation, 541 Loyal Street, Danville, VA 24541 with a note for Estate Planning Seminar.

For more information on the webinar broadcast or The Community Foundation, contact the Foundation office at 434-793-0884 or visit its web site www.cfdrr.org

The Diane Marie Gross Scholarship was opened by Inara Aster Dodson in memory of her daughter Diane Marie Gross, who was tragically killed in an automobile accident at the young age of 16. The scholarships will be given to deserving Danville area students attending Washington & Lee University or the College of William and Mary.

Community foundations are established to manage a collection of separate funds created by individuals and corporations – a community of donors – to enhance the quality of life in a local area. These funds are pooled and invested under the direction of a board of directors comprised of community leaders. Income from the funds is distributed in the form of grants and scholarships. The first community foundation was created in 1914 in Cleveland, Ohio. There are now more than 700 community foundations nationwide, controlling aggregate assets in excess of $25 billion.

The Community Foundation is fully tax-exempt as an organization described in Sections 501(c)(3) and 170(b)(A)(vi) of the Internal Revenue Code.

For more information on the new scholarships or The Community Foundation, contact the Foundation office at 434-793-0884 or visit its web site www.cfdrr.org

The Rotary Club of Yanceyville Scholarship Fund has been endowed with The Community Foundation of the Dan River Region. The Scholarship will provide post-secondary educational scholarships to graduates of Bartlett Yancey High School.

Unfortunately, the scholarship was established upon the dissolution of the Rotary Club of Yanceyville. “We are deeply saddened that the remaining members found it necessary to dissolve the Club after 76 years”, said Barbara Scott, secretary of the Rotary Club of Yanceyville. “However, we are thrilled to have The Community Foundation continue the legacy of providing scholarships to graduates of Bartlett Yancey High School.”

“We are excited to accept this scholarship on behalf of the Rotary Club of Yanceyville,” said Debra L. Dodson, executive director of The Community Foundation. “What an honor it will be to continue the club’s good name and good work in the community.

Other people who wish to support Bartlett Yancey High School scholarships can make donations to the Rotary Club of Yanceyville Scholarship Fund. Checks should be made to The Community Foundation, c/o the Rotary Club of Yanceyville Scholarship, 541 Loyal Street, Danville, VA 24541. Applications for the scholarship will be available by February 1, 2014 at the high school and the foundation’s web site https://www.cfdrr.org